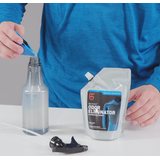 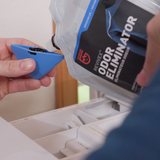 
Tuotteen kuvaus
Body odor and pet smells can ruin expensive gear. When washing just isn’t enough, use Revivex Odor Eliminator. Previously known as Mirazyme, this powerful and natural formula utilizes water-activated microbes to remove funky smells. Rather than hide or mask bad odors, it safely removes the bacteria causing the odor. Apply as an odor eliminator spray or use it to soak neoprene suits. Add it to a machine wash as another option to easily refresh base layers and activewear. This gentle formula can be used on most fabrics including fleece and cotton. From wetsuits to tents, eliminate bad odors once and for all with Revivex Odor Eliminator.

Depending on how ingrained the mold and mildew are in the fabric, Revivex Odor Eliminator could be used to eliminate them. Sometimes you can remove mold by simply scrubbing with soap and water. Other times, you may need something more powerful like bleach.

We recommend that you first hand wash the item with warm soapy water.

Click here for more tips on removing mold and mildew from tents.

How does it work?

Mix Odor Eliminator with water to activate the microbes. The microbes use water as fuel and they’ll begin consuming any bacteria present. Once they’ve consumed the bacteria, they’ll consume themselves. They will continue to consume until their food source (water) runs out.

For best results, once diluted with water, use within 72 hours

Preventative Maintenance: Items like wetsuits, dry suits and waders that have a tendency to develop odors can be treated with Odor Eliminator as preventative maintenance. Mix a ½ oz. of Odor Eliminator per 20 gallons of water. This is ideal for items that can be soaked or completely saturated.

Spray Bottle Preventative Maintenance: Items like shoes, boots, tents, backpacks and leather fabrics that should NOT be soaked can be treated with Odor Eliminator as preventative maintenance as well. Mix a ½ oz. per 16 oz. of water. The item does not need to be saturated with the Odor Eliminator solution, but should be noticeably damp.

Spray Bottle Strong Odors: For strong or stubborn odors like pet urine, mold/mildew smells and body odors on items that can NOT be soaked, mix 2 oz. of Odor Eliminator per 16 oz. of water. Again, the item does not need to be saturated with the Odor Eliminator solution, but should be noticeably damp.

Normal Dilution: Items with noticeable odors that can be saturated or soaked with water (i.e., clothing, wetsuits, dry suits, select outdoor gear), mix 1 oz. per 5 gallons of water. Ideally, the item will be soaked or saturated with the Odor Eliminator solution.

Heavy Dilution: Items with extremely stubborn odors that can be saturated with water (i.e., sports gear, skunk spray, pet odors, footwear, waders, wetsuits and drysuits):  3 oz. per gallon of water. The item should be soaked in the Odor Eliminator solution until completely saturated.

Odor Eliminator does not mask odors. The microbes actually consume the odor-causing bacteria.

Odor Eliminator will not leave behind any residues or impact breathability, so feel free to use it on technical fabrics and GORE-TEX gear.

Odor Eliminator will remove odors typically associated with mold and mildew, but it is not guaranteed to kill mold or mildew. It really depends on how ingrained the mold is into the fabric. Sometimes you can remove mold or mildew by simply scrubbing with soap and water. Other times, you may need something more powerful like bleach. I would recommend that you begin by hand washing with warm soapy water.

Odor Eliminator has a two-year shelf-life. Mixing it with water activates the microbes. Otherwise, they remain fairly dormant. However, because the solution contains live organisms, they can and will begin feeding on themselves because they don’t have any other food source.

Odor Eliminator will only remove “natural” odors. It will not remove chemical odors, fragrances or perfumes.

Odor Eliminator specifically will not cause the polyurethane coating (PU) coating on tents or backpacks to break down, but soaking the tent or pack in water can.

If any lingering odors remain, you can treat the item again.

Do not apply heat or dry in direct sunlight as heat may also kill the microbes.

It is best to allow the item to air dry as long as possible. This gives the microbes plenty of time to do their job.

Soaking for an extended period of time is not recommended. The idea is to saturate the item with microbes and then allow those microbes to consume the odor causing bacteria. Typically you will soak fabrics for about 5 minutes and non-fabric surfaces for about 15 minutes.

You will not notice a reduction in odor, until the item has air dried completely.

When treating footwear we recommend to scrubbing the foot bed with a stiff brush to help break up the invisible film of bacteria which tends to develop on foot beds.

May darken leather. Test for colorfastness before use.

The many uses of Revivex Odor Eliminator 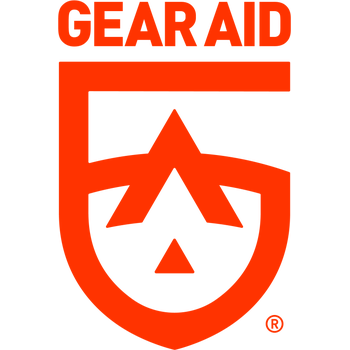 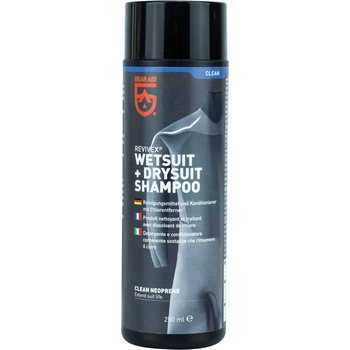 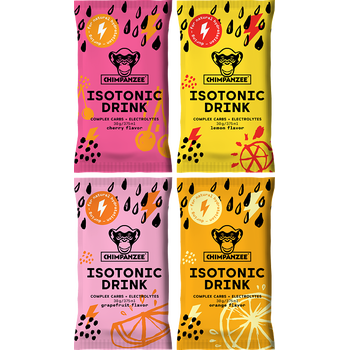