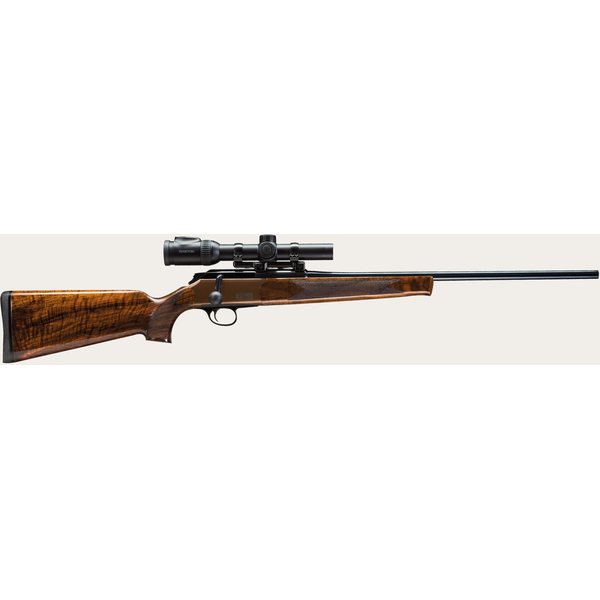 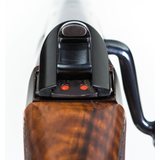 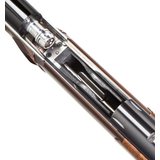 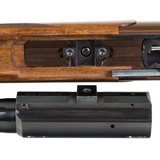 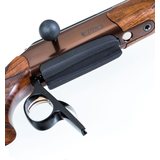 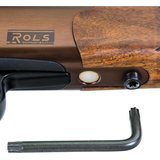 The new CLS (Chapuis Locking System) is patented. The bearing surface of the locking lugs is 260 square millimeters, making it one of the largest and most reliable on the market, as proven by resistance tests applying pressures well over 8500 bars (123,000 PSI).

• THE BOLT LOCKS INTO THE BARREL

A locking ring, inserted into a recess machined into the barrel behind the chamber, bears 7 locking lugs, which tilt from front to back, to lock/unlock the bolt head.

A locking sleeve around the bolt slides on the bolt, controlled by the bolt handle, which acts as a lever to control its movement. It provides a fully secured locking system of the bolt head. The seven locking lugs swing to the “open” or to “closed” position, thus locking or unlocking the bolt. They are controlled by this sleeve. Once this sleeve is locked into place, it swings the lugs into the “closed” position. An unintended opening of the bolt is thus made impossible

The ROLS® rifle has a separate cocking device, with perfect ergonomics. The cocking device controls a piston that
compresses the firing pin spring for firing, allowing also decompression of the spring for decocking. A hunter can then hunt safely with a chambered cartridge. In the un-cocked position, the bolt remains secured, thus preventing any unwanted bolt movement.

The cocking device is a thumb-pushed cocking lever which has been extensively tested so that decocking your rifle is the most simple, safe, and rapid as possible, even with scope and ready to fire, should you decide at the last moment not to shoot. In this case, on some of our competitors rifles, it is not always easy to slip your thumb under the scope to press the cocking device. On the ROLS® it is easy, since a slight pressure exerted with the thumb on the button located on top of the cocking lever releases it, decocking the rifle.

The levered bolt-handle is located just above the trigger. Cycling the action becomes intuitive and very quick.
Safety was the essential objective when developing this rifle.

As long as the bolt-handle lever is not fully pushed into a vertical position and the bolt head is not totally locked, a passive safety device prevents the firing pin from striking the primer of
the cartridge. An unintended discharge is thus made impossible.

Our goal was to provide an in-line feeding system, so as to avoid any feeding problems. With this high capacity rotating magazine (4 rounds + 1 for standard calibers, 3+1 for magnum calibers) the cartridges are lined up with the chamber.

Reloading is made smoother and easier. We also invented a magazine lowering device, controlled by the bolt. During the forward movement of the bolt shaft, the magazine lowers into the receiver, removing any impediment of the cartridge between magazine and chamber.

Design and ergonomics : beauty and efficiency

Because in a hunt is often played out in tenths of seconds, one must have a quick-handling rifle with good ergonomics.

The stock of the ROLS® has a straight comb and a pistol grip, shaped so as to avoid any strain in the hand, to provide comfort and a perfect, instinctive shooting stance. The round-shaped receiver and bolt help the handling.

Lastly, its weight not exceeding 3 kilos and its perfect balance make it very handy and incredibly easy to shoulder. Then, you only have to concentrate on the essential… your target.

The barrel is held in a sleeve, resulting in perfect headspace when the two are assembled. This sleeve has a recoil lug
machined with a high degree of precision, less than 1/100 of a millimeter, locking on a steel-made bedding carried by the receiver.

This precision allows the perfect changing of barrels with exceptional accuracy on the first shot. Changing the barrels is made by screwing/unscrewing the screw under the receiver, with the provided wrench.

The development of the detachable, rotating magazine of the ROLS® took many months and a patent is pending. This magazine is located over the trigger guard and trigger, keeping the overall length of the rifle to a minimum. It can be removed in a simple two step procedure.

For rapid reloading, especially on driven big game hunts when many shots are fired, it is also possible to reload the magazine from the top of the receiver. For safety, when the trigger floorplate opens, the rifle is automatically decocked.

Switching to a magnum caliber requires a change of the magazine and of the bolt-head.

Whenever the new bolt head is not be properly locked into the bolt shaft, the rifle will be blocked in the opened position. Thus the rifle cannot be used.

Fail-safe primary extraction of the case

Our carrier has an extractor rod, controlled by the bolt handle. Thanks to this extractor, all cases will be mechanically extracted from the chamber, avoiding any sticky shell and difficult opening of the bolt.

For greater accuracy, the scope mount is fixed directly on the barrel. A recoil lug locks into a recess, machined on the top and center of the sleeve. Thus, the scope mount is always positioned in the same place, even after removal and resetting of the scope, enabling perfect accuracy on the first shot. The scope can bet set with one hand. This entirely new mount has also been patented. 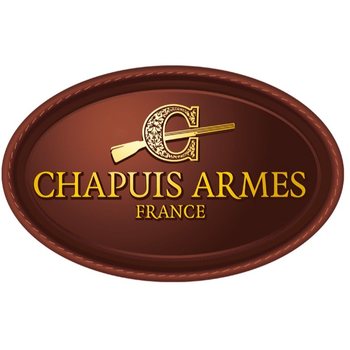