If you want to stay connected to the rest of the world on hikes in the middle of the wilderness, the best solution is to bring a satellite communicator. Communication is based on the Iridium satellite network and due to this, the device is not dependent on mobile network. Messages and emergency calls will work anywhere on earth as long as the device has sufficient visibility to the sky.

inReach Mini 2 is suitable for example for ultralight hikers!
The device's predecessor has been a popular choice for hikers on the legendary 4,265-kilometer Pacific Crest Trail in the United States.

Garmin's new inReach Mini 2 is the best locator and satellite messaging device on the market at the moment for users who value small size and lightness. The palm-sized device weighs only 99 grams and is easy to carry anywhere. The locator can be attached to a convenient place with a carabiner hook included in the package.

In addition to satellite communications, the inReach Mini 2 also acts as a GPS locator. You can browse maps on the screen of a Bluetooth-connected phone, but you can read the coordinates of your location directly from the inReach Mini 2 screen.
However, using all the features of the inReach Mini 2 requires activating your inReach monthly subscription.

Improvements in key features
Compared to the original inReach Mini, the upgraded inReach Mini 2 offers, above all, improved battery life. The device's battery lasts for up to two weeks when the monitoring interval is 10 minutes and the view of the sky is unobstructed.
By adjusting the settings, the battery life can be further extended, and the real-life battery life depends very much on the user and the operating situation. The device is charged via the USB-C connector.

As a new feature, the inReach Mini 2 includes TracBack guidance, which guides the user back to the starting point of the trip. TracBack works directly from the locator screen, meaning the feature is available even without your phone. You can also use the device to retrieve weather reports.

The inReach Mini 2 can be programmed with pre-written messages that can be sent with a touch of a button. The device can also be set to send location information automatically at desired intervals, allowing your loved ones to track the progress of the trip in real time. Recipients receive messages in the form of either an email or a text message, and the map image can be attached in the form of an incoming link.

Despite the spring sun, the average temperature of the hike remained strictly frosty. The inReach Mini 2 was not disturbed by frost and remained operational in all respects. There were no problems with the battery life either, and after the weekend there was still plenty of battery left.
If necessary, the inReach Mini 2 would have been successfully charged from a power bank during the trip.

During the trip, messages were sent via satellite without any problems, and our people at home were abled to follow the progress of the trip from a map. Although the trek took place in southern Finland, where mobile networks are generally better than in Lapland or other remote area, there still was not enough mobile/ data network available at all times.
The inReach Mini 2 sent and received messages reliably even when there was no cell phone service. GPS positioning also worked great and the location on the map was found quickly.

Sending pre-written messages in particular proved to be an excellent feature and they were easy to send directly from inReach Mini 2. An endless number of pre-written messages are included even in the cheapest inReach subscription, so the threshold for sending an “i'm all right” -message is very low.
It was more convenient to write longer custom messages using a mobile device, although it is also possible to write them directly from a the inReach Mini 2 as well.

Fortunately, there was no need to test the emergency call during the trip. However, from the hiker's point of view, it was comforting to know that in a bad situation help could be called even if there was no mobile service available.

Overall, the inReach Mini 2 proved to be an excellent travel companion for added security and communication. At the same time, the compact device is so inconspicuously small that it's no use to leave it at home to save weight, even on short hikes.
In the future, the inReach Mini 2 will definately join along on climbing- and canoeing trips as well as all other nature adventures. 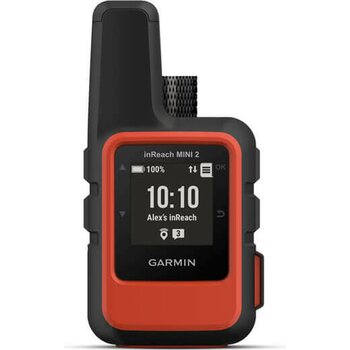